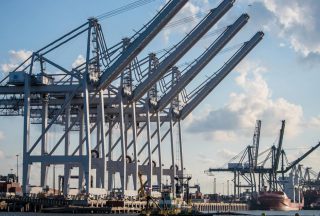 With the completion of maintenance dredging of the Bayport channel,the Bayport Container Terminal in Texas is now capable of handling 45-foot draft vessels, according to the Port of Houston Authority.The Bayport channel is accepted and will be maintained by the US Army Corps of Engineers at a depth of 48.5 feet mean lower low water (MLLW), the authority added.With this development, Bayport joins Barbours Cut terminal to take full advantage of the Houston Ship Channel depth.In late September 2015, Barbours Cut terminal was granted authorization by the Houston Pilots Association to receive Post-Panamax vessels with a 45-foot operating draft after a project to widen and deepen the Barbours Cut channel by additional 5 feet and upgrade the terminal was completed.Barbours Cut recently established a new record for container lifts from one vessel when 4,198 moves were completed working with the 5,000 TEU COSCO Boston.Port Houston handled more than 16 million tons of cargo for the year, an increase of 12 percent over last year, driven by a 15 percent growth in container volume.