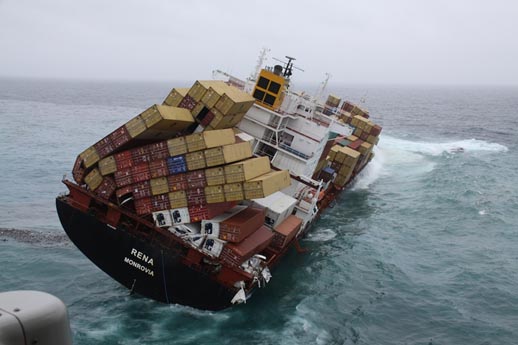 Why Containers Get Lost at Sea?

Containerization has reformed the ocean transportation of cargo becoming the standard method of moving goods across the globe today. Although the containers have simplified the shipping of large quantities of goods all round the world, there have been a number of incidents, which involved the loss of large number of containers during their ocean transit. Based on the survey results of the World Shipping Council (WSC), it is estimated that on average there are approximately 546 containers lost at sea each year excluding catastrophic events. In addition, an average of approximately 1,679 containers are lost every year when the catastrophic losses are calculated. The stats also reveal that the loss of shipping containers has increased by 2/3 over the last 5 years, which is very high when compared to figures on losses in the 12-year period after 1997.The presented statistics raise a question on the key reasons that affect the security of the shipping containers, the losing of which leads to tremendous loss of both goods and money.The following are some of the key reasons that lead to containers being lost at sea:

Improper Packing: Poorly packed containers with inadequately secured cargoes are usually destroyed before they reach their destination. Minimal to large imprecisions in shipping and packing are to blame for the majority of losses as containers fail to withstand the rough seas. Reason behind such occurrences could be improper staff training and inadequate knowledge and skills.

Parametric Rolling: Parametric Rolling is a type of movement that is experienced only on container ships. It is an unsteady phenomenon which can quickly generate large roll angles that are coupled with significant pitch motions. The rolling occurs in phase with pitch, exerting high pressure onto containers and their securing systems. The parametric rolling can even break down the load of lashings and containers, which can result in damages to both the cargo and the vessel, resulting in loss of containers.

Poor Stowage: If a container is overloaded and improperly stowed, this can lead to structural damage of the container resulting in the collapse of the stow. This can be problematic in emerging industrial countries where shipping containers are often loaded at remote inland locations by shippers that are unfamiliar with proper loading practices and securing of cargo within a container.