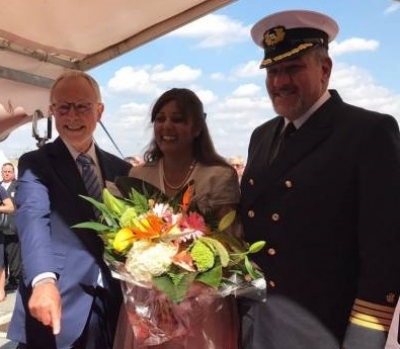 One of the latest additions to Hapag-Lloyd’s fleet the 15,000 teu Afif was named by the UK’s Shipping Minister Nusrat Ghani on Monday.The LNG-ready containership was named at DP World’s London Gateway Terminal in front of some 260 guests comprising 260 importers, exporters, supply chain executives and Government officials.“It is an honour to name Afif, Hapag-Lloyd’s latest container ship, as it will have a vital role in the growth of the UK economy by moving our exports and imports,” said Ghani.

It is the first time that Hapag-Lloyd has named a ship in the UK for 20 years. “We are happy to once again name a ship in the United Kingdom after twenty years. The ‘Afif’ is over three times the size of the ‘London Express’, a ship that received its name in Southampton, England, in 1998,” said Anthony J. Firmin, coo of Hapag-Lloyd.The Afif was built at Hyundai Samho Heavy Industries for United Arab Shipping Co (UASC) that Hapag-Lloyd merged with in 2017.Chris Lewis, ceo of DP World London Gateway, commented: “Hapag-Lloyd has been a key early customer and supporter of DP World London Gateway and we are pleased to collaborate with everyone in the supply chain to give UK shippers fast, reliable and safe access to a global network via Hapag-Lloyd.”