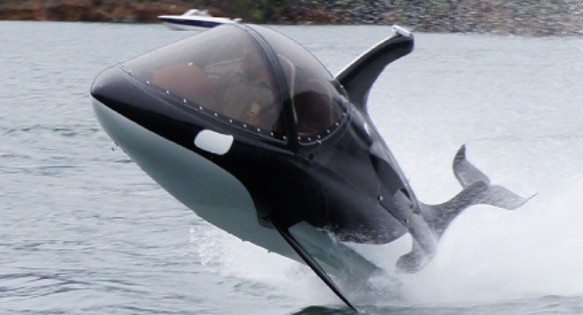 How does one judge the top 10 coolest looking boats on the planet? Eye appeal—or at least, eye-grabbing ability—is the number one qualification. And after gazing upon countless craft, we’ve settled on these ten as winners. You may or may not agree, but in each case we think these picks are works of nautical art, in one way or another.1. Sea BreacherWhat could be cooler than a boat that looks like an orca? Or for that matter, one that can be finished to look like a shark, torpedo, or alien spacecraft? The Sea Breacher is a semi-submersible boat that can cruise at speeds up to 50-mph, thanks to a 255-hp Rotax engine. It can dive five feet beneath the surface, and leap 16’ into the air. It can even lighten your wallet—by $65,000 or so – but that will be money well spent, if you want the most totally awesome-looking boat in the marina.

SWATH stands for “small waterplane area twin hull,” which is a fancy way of saying it’s a cat that has a tiny amount of drag. And the Sea Shadow is the most unique of all SWATH vessels; it’s the US Navy’s testing ship, also known as the IX 529. It may come as a surprise that this boat was built all the way back in the 1980’s, but with one look, it should be no surprise the Sea Shadow makes this list.

At 102’ long by 49’ wide, this colossal craft doesn’t just look like the craziest boat under the sun – it also gets its power from the sun. Covered in solar panels, in full sunlight it produces 127 fossil-fuel-free horsepower, and can cruise at up to 10 knots. It was built to prove that solar power has value at sea, by cruising around the world courtesy of the sun’s rays, alone. But the price tag may be enough to make your envious eyeballs pop: building this boat cost $26 million.

Remember this one? There’s a good chance you’ve seen it before; after setting a record for a 60-day circumnavigation of the globe while running on biodiesel, this boat was renamed Ady Gil and turned over to the Sea Shepherd group. You know, the Whale Wars folks? Unfortunately, they thought it was a good idea to drive in front of a moving whaler and, surprise! The boat got crushed. So take a good look at the pic, because this is one cool-looking boat you’ll never get to sea in person.

Built by Perini Navi, the Maltese Falcon is one of the largest private sailing yachts in the world. More importantly, it looks totally awesome. The unique carbon-fiber masts house furled sails, which can be deployed at the press of a button. In fact, the computerized control system makes it possible for a single operator to run this entire rig.

This turbine-powered raceboat icon was built by Mystic Powerboats, in Deland, FL. Blink, and you’d miss it—with 4,200 HP in the stern, it could break 200-MPH. Unfortunately, Miss Geico burned to the waterline when a hydraulic fitting failed, and can be seen no more.

Okay, we admit that calling the US Navy’s LCAC (Landing Craft, Air Cushioned) a boat is something of a stretch. But it does float and it can sink—the only real prerequisites. And it looks so dang crazy, we just can’t resist including it. These multi-purpose hovercraft can be used for everything from transporting tanks to storming beaches, and if you see one with your own eyes, we only have one bit of advice: Run!

What could be cooler than a boat that’s also a car? The Gibbs Aquada is both, and with one press of a button, the wheels come up and a jet drive with almost 2,000 pounds of thrust kicks in. The entire process takes a mere 12 seconds. Power comes courtesy of a 175-hp 24-valve  V-8, which can get the car-boat on plane and up to 30-mph. And the Aquada comes with reverse sticker-shock: you can get one for around $100,ooo. Considering the cost of most modern powerboats, this seems more than reasonable.

Arggh, and Ahoy me matey! If you like the looks of the Sea Gyps, you can have your very own pirate ship, powered by single or twin outboards (hidden under the transom). These modern-day marauders are used as tour boats and for kids' birthday parties, and a half-dozen versions currently ply the waters from Massachusetts to Myrtle Beach. They’re USCG inspected, rated to carry 38 to 45 passengers, and come fully armed with water cannon mounted along the gunwales.

The Footprint does have a striking resemblance to the shuttle craft from Star Trek. And yes, the aft end appears to be a pop-up camper (because it is). But whatever you think about combining a pontoon boat, house boat, camper, and space shuttle, this thing looks downright cool. Intended for extended cruising on lakes and inland waterways, the Footprint has an 8’2” beam that can be increased to 11’9” by extending cross-beams between the pontoons. Nifty!

Got a boat you think should've made our Top 10 Coolest Looking Boats list? Add it to the comments below, or on the Boats.com Facebook page, along with a good reason... and maybe we'll follow up with a second list.