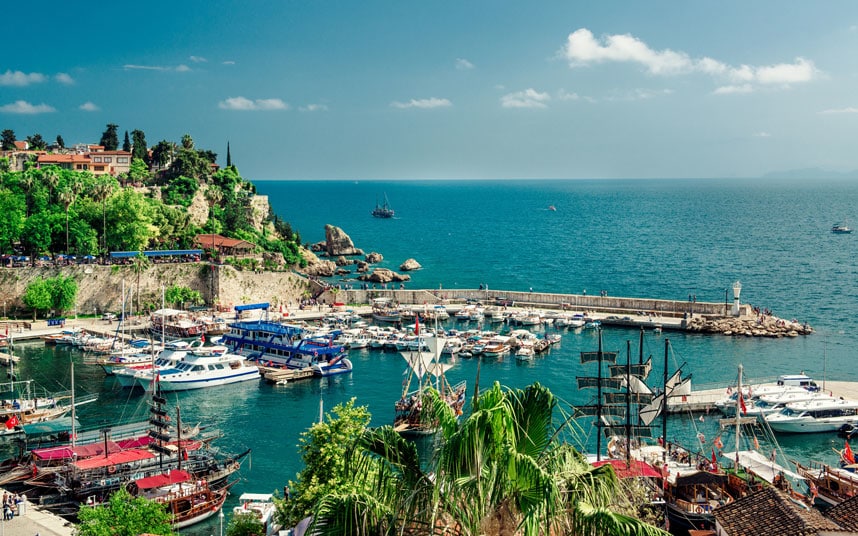 The top 10 beach holidays in Turkey

For more general advice on booking a holiday in Turkey, see our Turkey summer holiday guide. Our guide features expert recommendations for beach, villa, culture, food and drink and activity holidays. All prices are for a week in the cheapest double room in spring or summer unless stated otherwise. They are subject to availability.

This broad strip of gently shelving white sand is not only Turkey’s longest beach, but also its most beautiful. Kids love its warm shallows, the legions of body-surfable waves and the serried ranks of dunes backing it. Development at its stunning south-eastern end has been confined to one very reasonably priced beach café with umbrellas and sunbeds for hire, reached through the romantic remains of a Roman city preserved in the shifting sands. The low-key Patara Viewpoint hotel, run by Muzaffer and Anne-Louise, is set around a pool on a quiet, leafy hillside behind the ruins. They have been providing a friendly service for visitors to this unique spot in south-west Turkey for over 20 years – a service that includes free rides to and from the beach and an optional weekly barbecue.

Studded with olive groves and domed white Ottoman-era cisterns, the beautiful rocky finger of the Bodrum Peninsula has long been a favourite with Turkey’s well-heeled elite. The downside of this popularity has been the inevitable tourist development, the upside is that it has been (for the most part) done with taste. The peninsula’s main town, all-white Bodrum town, clustered around the splendid castle of St Peter, is extremely attractive. There are plenty of pretty beaches out on the peninsula, including Bitez and Türbükü, and windsurfing opportunities aplenty. The exclusive Mandarin Oriental, Bodrum, is set on the lusher northern shore of the peninsula. With two beaches of its own, a pool complex, a cutting-edge spa, chic restaurants and sounds provided by Istanbul’s hip Babylon club, this is the perfect sophisticated holiday hideaway.Read a full review of Mandarin Oriental Bodrum

Given that it has adorned Turkish Ministry of Culture and Tourism promotional posters and the covers of legions of guidebooks for at least three decades, no one could argue that the beautiful, pine-fringed and mountain-backed lagoon of Ölüdeniz (Dead Sea) is exactly an unspoilt paradise. Yet despite the rampant development, the lagoon and its environs are still spectacular. There’s plenty to do, too, apart from swim in the azure waters of the lagoon or off the more prosaic adjacent beach) or take a boat to the pretty beach at Butterfly Valley. Tucked away just behind the beach-front in the resort of Ölüdeniz, the Oyster Residences is a delightful, low-rise 26-room hotel set among lush vegetation with a pretty pool.

Until the 1920s Kalkan was a tiny Greek fishing village; by the 1980s it had morphed into a bohemian resort for arty Turks fleeing big city life. Some of its past has clung on despite its transformation into a sophisticated resort favoured by Brits. They are drawn by its beguiling setting, dropping down a hillside to a small yacht harbour fronting a picturesque bay, pretty fishermen’s cottages, cosy restaurants and chic café-bars. Kalkan is also appreciated for what isn’t here – no rowdy bars, no clubs, no full English breakfasts. The village beach is small, but the sands of Patara are very close, as is stunning Kaputas. Courtyard at Whitehouse comprises six rooms in three beautifully converted 1920s properties set around an elegant, shady courtyard, on a quiet street in the heart of the old village.

For visitors looking to enjoy a traditional Mediterranean beach and pool-side holiday while also having easy access to the nightlife and shopping opportunities of a bustling city of over a million souls, Antalya is ideal. Its old walled quarter is packed with bars, clubs and restaurants, its suburbs peppered with shiny new malls with cinemas and great shops. Antalya is also home to renowned annual film and piano festivals, as well as having a great venue for classical music, opera and ballet. The Su Hotel is a startling all-white concept hotel superbly located where the great curve of Konyaalti beach meets the limestone cliffs on which the city is built. The views from the giant pool across a brilliant blue gulf to the mountains of Lycia are fabulous, and the experience of staying in a room with brilliant white walls, floors, bedding – even TV – unique.

Superbly located on a low, rocky peninsula pointing out into the Med from a belt of fine, white-sand beaches, Side (pronounced See-day) is one of the most attractive resort towns on Turkey’s Mediterranean coast. Within the old walled quarter are ancient Greek-Roman temples and fishermen’s cottages, just outside dune-engulfed ruins and a stunning Roman theatre still used for concerts to this day. There are plenty of places to eat, drink, club and shop here too. The best thing about the Barut Andiz couples-only hotel here – value for money aside – is its proximity to old Side, meaning you can escape the hotel to explore the ancient ruins and perhaps take a moonlight stroll to the romantic temples of Apollo and Athena at the tip of the peninsula. You’ll be following in the footsteps of a famous couple who trysted here – Antony and Cleopatra.

Clustered around the foot of a massive, citadel-crowned rock looming high above the Mediterranean, and backed by the rugged Taurus mountains, Alanya is spectacular. Even the miles of development swamping the long beaches either side of town don’t detract from its singular charms. Home to pirates in the Roman era, and a major settlement under the Seljuk Turks, it has plenty of historic sites to explore, there are boat trips around the rock, and great swimming from the beaches to the east and west. But old Alanya is best explored from the well-situated boutique Villa Turka hotel. Fashioned from an attractive period Ottoman town house, the hotel is in a peaceful location beneath the ancient city walls astride the great rock of Alanya, with expansive sea views.

The former Greek village of Alaçati is famed for the attractiveness of its old houses and cobbled lanes. Located on the beautiful Çesme Peninsula, Alaçati is a favourite of moneyed Istanbulites. The downside of this is that prices are a little high, the upside that restaurants and cafes serve up the very best fare to their Turkish-food-savvy clientele. It also gives visitors a more authentic holiday experience than in resorts dominated by Brits, Germans, Russians et al. Browsing the village’s galleries and boutiques apart, there’s not much to do except head for the sandy beach a mile away. The first, and best, boutique hotel in the village is the gorgeous Tas, with eight elegant rooms in an 1890s merchant’s house

One of the most unusual resort destinations in Turkey, small-town Dalyan nuzzles up to a languid, reed-fringed river, backed by cliffs peppered with the rock-cut tombs of ancient Kaunos. Yet it’s only a peaceful half-hour boat-ride downriver to the white sands of Iztuzu beach, famed for its nesting turtles. The seasonal presence of these marine repitles has saved Iztuzu from the beach-front development that has marred so many Mediterranean resorts, making the daily return river trip well worth it. Anatolian Sky offers well-priced packages in the Dalyan Resort Hotel, a little over half a mile out of town, on a quiet stretch of river bank. The well-landscaped hotel has three separate, low-rise blocks ranged around a large pool.

Backed by pine-clad mountains, fronted by a sea of the deepest blue and wreathed in a green haze of citrus groves, low-key Cirali is a gem. And so it should remain, as development is strictly controlled – its beautiful one-and-a-half mile-long beach is a major nesting site for the endangered loggerhead turtle, and the romantically vegetated ruins of ancient Olympos haunt its southern extremity. It’s little wonder that those in search of tranquillity have found the place irresistible. One such couple are fluent English speakers Engin and Pinar, owners of the Myland Nature Hotel and refugees from mega-urban Istanbul. The emphasis here is on organic food and yoga, with daily morning yoga sessions; photography courses by request.