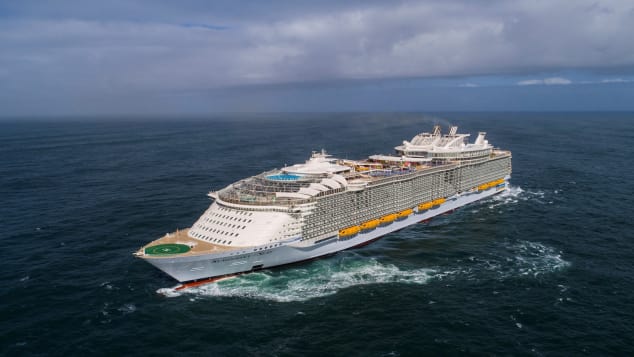 (CNN) — After three years of construction, the world's largest cruise ship just set sail from Barcelona, Spain, on its inaugural voyage to destinations around the Mediterranean.But the ship's record-breaking size isn't its only claim to fame.The Symphony of the Seas is home to the tallest waterslide at sea, the ocean's fastest Internet and more works of art than the Louvre has paintings."The most surprising and memorable thing for me was that first sight of the ship -- seeing how big and immense it is," Balwin Yeung, Royal Caribbean's director of sales and marketing in Hong Kong, tells CNN Travel."You can actually see it the moment you almost step out of the airport in Barcelona, since the port is just 10 to 15 minutes away. It makes a huge first impression."

As the world's largest cruiseliner by volume, Symphony of the Seas stretches 1,188 feet long and is filled with 22 restaurants, 24 pools and 2,759 cabins.At capacity, the ship can host about 6,680 guests -- plus 2,200-some crew members for a total of nearly 9,000 people."Eight out of 10 of the largest ships in the world were built by Royal Caribbean, but this one really pushes the envelope," says Yeung."At the same time, you don't really feel crowded because there are 18 decks on the ship. It's like a building, right? There are 24 elevators and seven neighborhoods. Each neighborhood has its own personality, so it tends to naturally segregate the crowds.""Neighborhoods" such as the adults-only Solarium lounge or leafy Central Park aim to provide a refuge, whereas a dedicated Splashaway Bay water park is packed with families."Central Park is really peaceful, with more than 20,000 tropical plants and an alfresco wine bar," says Yeung."Others will like the Boardwalk, which is much more outdoorsy and fun for families with a carousel."