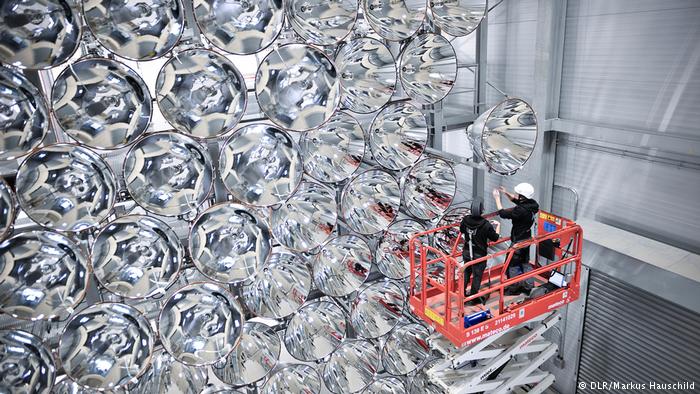 Scientists in Germany have launched their massive "Synlight" device, billed as the largest artificial sun in the world. The researchers hope that the rig will help them synthesize hydrogen for fuel.The set-up includes 149 xenon lamps, each powerful enough to be used in a cinema projector. According to German scientists, the giant honeycomb-like apparatus can focus all of its simulated solar energy to a surface of 20 by 20 centimeters, which is approximately 8 by 8 inches. By doing so, the surface would receive the equivalent of 10,000 times the normal solar radiation.German Aerospace Center DLR tested the device on Tuesday near the city of Cologne in western Germany.The researchers say that the device can induce very high temperatures that would help them find new ways to obtain hydrogen. The gas produces no carbon emissions whenburned for fuel.

By focusing the energy on a small surface, "Synlight" can drive the temperature to 3,000 degrees Celsius (5,432 Fahrenheit)"In the future, renewable energies will be the backbone of global energy supply," said the head of DLR's Energy and Traffic division, Karsten Lemmer. "The fuels obtained by using solar energy have a lot of potential for long-term storage, synthesizing chemical raw materials and cutting down on CO2 emission."Using the sunCurrently, the dominant way to obtain hydrogen is by electrolysis of water, splitting its molecules into oxygen and hydrogen. The process requires large amounts of electrical energy. The German-made rig, considered the largest of its kind ever made, also needs large amounts of energy to operate. In four hours, the device burns through enough electricity to power a four-person household for a whole year.

The combined power of the lamps totals to about 350 kilowattsHowever, by researching the effects of the co-called artificial suns like the "Synlight," scientists hope to reach the point where they can use the natural energy of the sun to synthesize hydrogen.Researchers hope to mix hydrogen with carbon monoxide to create a stable fuel that can be used by aviation industry.