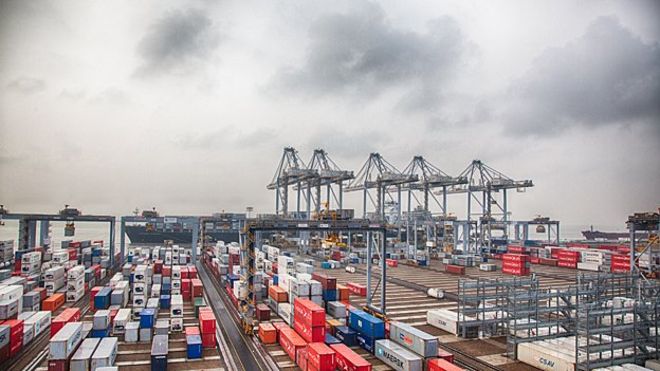 
Heavy machinery rolls along rails to the strange music of beeps and sirens. Further from the shore, 20m-high stacking cranes choreographed by computers load and unload lorries . And all this comes with a minimum of visible human effort.Welcome to the 21st Century container port.This is London Gateway on the River Thames in Thurrock, Essex. It's owned by Dubai-based DP World.Britain's newest container port - it's less than two years old - uses the latest technology to make its operations as efficient as possible.In the control room, banks of computer screens could place you in any generic open-plan administrative office.But the hard hats dotted about hint that this is somewhat different.

Closer inspection of some of the screens reveals charts containing numerous charcoal blocks - graphic representations of the metal containers that are the staple of the global freight trade."From here we plan, control, monitor and execute all the container movements", says operations manager Ivan Deosdad i Lopez."It's like a very complicated game of Tetris."
Tetris is a maddeningly addictive computer game involving the arrangement of coloured blocks. This is why London Gateway actively seeks job applications from gamers.After all, the controls of a quay crane are not too dissimilar to a game console.These quayside cranes are huge, roughly equivalent to the London Eye in height with their booms up. And they can move four containers on or off a ship at once.Each container is identified by an optical character recognition system that reads a unique identifying code - a combination of four letters and seven numbers. This helps track the containers as they move around the world.
The 6m or 12m long metal containers can carry anything from car parts to clothing, perishables to periscopes - in short, a vast array of goods demanded by industry or consumers.Southampton's port - also owned by DP World - offers customers "live terminal data" giving them the ability to track cargo "from ship to shore", while the UK's busiest container port at Felixstowe has just commissioned two new track-mounted gantry cranes to increase cargo volumes by rail.

While a lot of the port operations are automated, people are still required. Yet the workforce is a far cry from the nearly all-male ports of old."Around 1-in-10 of the terminal operatives is female, which I guess is pretty impressive for the port industry," says Lucy Golding, a terminal operative.
Her duties include driving tractors to move containers within the port. She also happens to have a Masters in History from the University of Amsterdam.Elsewhere on the site, a former beautician from Basildon retrained to become a crane driver.

Of course, it wasn't always like this. Manual handling of loads on and off barges under sail occurred within living memory."We used to carry fishmeal which used to stink to the high earth," recalls 71-year-old Suffolk skipper Gordon 'Willie' Williamson. He's now master of the 1909 Thames sailing barge, Ardwina.
"Some barges used to carry what they called hoof and horn to take to the glue factory, which was the bones and hoofs of animals."Holds that had carried such odorous cargo required fumigation before they could transport foodstuffs again, he says.In the Museum of London Docklands, historian Alex Werner goes back even further."At the beginning of the 19th Century and right through to the early 20th Century the most common form of shipment unit was the barrel."Although we now associate barrels principally with wines and spirits, in those days they would also carry dry goods, he explains.

Global trade has moved into the digital world and ports are using the latest technology to help them attract new trade from Asia and the Far East.Ships calling at London Gateway take in countries such as India, Argentina, Morocco, the Caribbean, and South Africa - it's like some vast never-ending version of London's Circle Line.The quicker ports can move containers between train, truck and ship, and the more reliably they can keep tabs on them in port and in transit, the better it is for importers and exporters.
Buyers are increasingly expecting next-day delivery of goods."The internet has had a dramatic effect on the way that retailers operate," observes Xavier Woodward, the port's communications manager. "We have a large modern port directly connected to what will become Europe's largest logistics space for retailers."
Technology is helping to make our hugely complex global trading system as efficient and seamless as possible.But who'd have thought Tetris gaming skills would be an advantage?
src: http://www.bbc.com/news/business-33245840