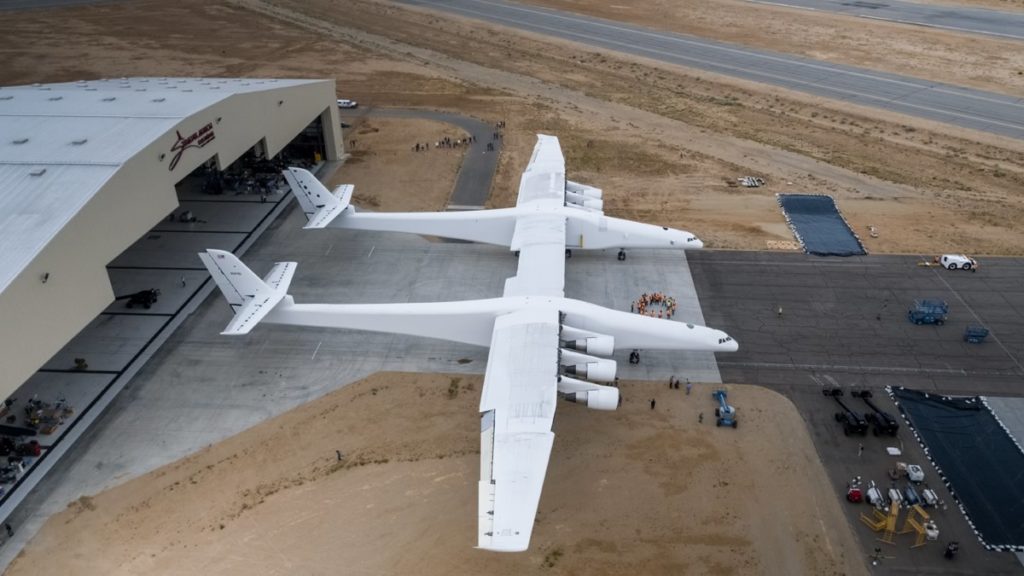 We’ve all heard about Howard Hughes’ “Spruce Goose” from the 1940s. We still see Antonov’s massive An-225 flying the skies today. But no one has quite seen the likes of the Stratolaunch, the next contender for “World’s Largest Aircraft,” which was revealed for the first time earlier this month.Created in 2011 for Stratolaunch Systems Corp., the aerospace firm created by Microsoft co-founder Paul G. Allen and SpaceShipOne co-creator Burt Rutan, the Stratolaunch is expected to be the main launch vehicle to boost privately-owned and -operated spacecraft into low-Earth orbit in the near future. The first test flights of the ungainly-looking bird are expected to happen over the next few weeks at Allen’s Mojave Air & Space Port, in Mojave, Calif.With a wingspan of 117 meters – longer than the height of the Saturn V moon rocket – and six Pratt & Whitney PW4056 engines salvaged from retired 747-400s, the double-fuselaged Stratolaunch has a range of 2,000 miles and a maximum payload capacity of about 590 tonnes. The spacecraft will be held underneath the reinforced middle section of the Stratolaunch’s wing, which will take off and land like a conventional jet aircraft.Once the shakedown flights this year have been completed, the company hopes to begin commercial orbital launches, using multiple types of Pegasus XL rocket vehicles, by 2020.As the weekend approaches, here is a gallery of images for this remarkable aircraft, which you may see cruising the Southern California skies later this year: