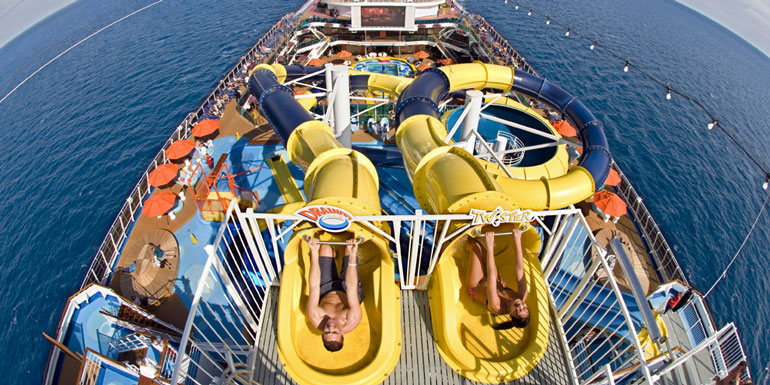 Cruise ship water parks are a top-deck jumble of cascading tubes in Crayola colors, cartoon characters playfully spraying into kiddie pools, and delighted screams that splash out of slides and from behind water cannons. These water playgrounds are an especially attractive diversion on the warm-weather itineraries offered year-round by most cruise lines. Cruise ship water parks are being quickly one-upped as cruise lines get creative with their brand-new ships. Innovative slides that thrill riders with drop-out floors, two-person floats and spiraling funnels now include dazzling light effects, and expansive top-deck areas have added even more square footage and water features as cruise lines roll out their largest water parks to date. In today's world of water parks at sea, five cruise lines stand out because of their impressive aquatic chops. Here are our favorites.

Offering the largest fleet of water parks at sea by far, Carnival Cruise Line is known for keeping things fun and light, even while drenched head to toe. All of the line's cruise ships feature at least one spiraling waterslide, but more than half have a version of the WaterWorks aqua park, which include, at minimum, a 300-foot slide and side-by-side racing slides among other water features. Carnival Breeze, Carnival Magic and Carnival Dream offer a 312-foot-long Twister waterslide and DrainPipe, a 104-foot tube that empties into a giant funnel. Breeze and Magic also have PowerDrencher tipping buckets, mini-racers and splash parks. The WaterWorks onboard Sunshine edges out the other slides with a 334-foot-long Twister waterslide, twin 235-foot-long slides that are part of Speedway Splash, mini-racers, a splash park, PowerDrencher and a total of 40 interactive water features. Not to be outdone, Carnival Vista features the fleet's largest WaterWorks water park to date, including an enclosed water tube Kaleid-O-Slide, on which riders make their way around 455 feet of twists and turns on one- or two-person rafts. As if that weren't dizzying enough, the Kaleid-O-Slide actually looks like a kaleidoscope, with colorful rotating lights and trippy visual effects. (A very similar water park can be expected on Carnival Panorama, debuting in late 2019.) Carnival Horizon features the cruise line's only Dr. Seuss WaterWorks, with a striped Cat in the Hat slide, a polka-dotted Fun Things slide featuring special effects, and of course buckets, mini-racers and a splash area.

Mediterranean cruise line MSC Cruises aims to be family friendly, and it has solidified -- or, rather, liquefied -- this promise with an impressive water park atop its vessel MSC Preziosa. Upon its debut, Preziosa claimed the longest single-rider body waterslide at sea, known as Vertigo. At 394 feet long and 42 feet high, Vertigo includes a 30-foot transparent stretch over the side of the ship, quite possibly inducing its namesake. For children under 47 inches, the Doremi (think: "Sound of Music") water playground on Deck 16 features sprays, fountains, water pistols and a "drenching bucket" that is likely to elicit surprised screams from wet, unsuspecting victims. Not to be outdone, MSC Seaside entices North American cruise travelers with a state-of-the-art water park ideal for its Caribbean itineraries. The aquatic area includes five waterslides: two high-speed racing slides with clear loops that extend over one side of the ship; Aquatube, an innertube slide; a flume slide for families; and an interactive Slideboarding tube, which combines video games, lights and music with a 367-foot waterslide. Other water park offerings include an AquaPlay and AquaSpray park for young cruisers. Nearby, passengers tempting fate to stay dry can climb the Adventure Trail, a ropes course that includes spray cannons.

With the exception of Disney Wonder, all of Disney's cruise ships feature an aquatic ride. Disney Fantasy and Disney Dream have the water park fan-favorite AquaDuck -- an elevated two-person-raft "water coaster," made up of a 765-foot-long tube that veers out over the side of the ship. Disney Magic arguably steps it up with AquaDunk, a more edgy slide version of its predecessor. The ride on this three-story body slide begins when a trap door opens beneath your feet. The drop sends you through a clear tube that extends 20 feet over the side of the ship, so it's not for Mouseketeers with vertigo. More mellow ways to get wet include the ships' pools and the AquaLab (not on Dream), a kids-only water play area blending a mad science theme with water jets, geysers, bubblers and a freshwater pool. The area also includes the Twist n' Spout Slide and the Nephews' Splash Zone (on Magic), a water playground safe for the younger-than-3 set (who needn't be toilet-trained, as long as they wear swim diapers). On Disney and Fantasy, this area is called Nemo's Reef, and it's a great way for little ones under 8 to cool off.

When Norwegian Escape debuted, Norwegian Cruise Line claimed the largest water park at sea. The aqua park includes a Free Fall waterslide, plus a feature called the Aqua Racer slide, a tandem set of waterslides in which competitors can race side by side in tubes. The water park includes four slides total, including a family-friendly enclosed tube slide near the dedicated kids play area, a two-story climbing structure, and water cannons and buckets that deliver "surprise drenchings." A multistory tower, a rope bridge and lookout platform are among the areas that kids can explore. They'll find spray jets to interact with along the way. Dedicated to maximizing time spent outside among sun and sea, Breakaway-class ships Norwegian Breakaway and Getaway each have up to five multistory waterslides, including the scream-inducing Free Fall. A playful splash area for the babes keeps company with gentle water features, while nearby, full-grown adults build up the courage to take on Free Fall with an unsettling countdown until the floor drops beneath your feet (a 250-foot fall straight down -- whoosh!). Two side-by-side racing slides, known as The Whip, twist sharply into pools below and, of course, there's a family-friendly slide for the littlest splashers. Norwegian Bliss, the line's newest ship, features a freefall waterslide called Ocean Loops that drops two loops -- both extending over the side of the ship with sections of see-through tubing. Norwegian Epic has a 200-foot Epic Plunge, beginning four stories above its pool deck and ending in a giant orange bowl.