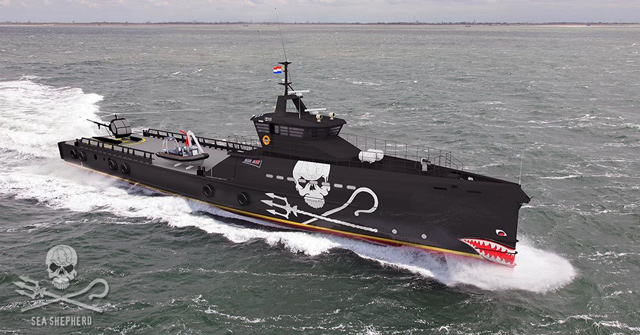 Sea Shepherd Heads to Damen After Winning the Jackpot

With the 8.3 million euro donation, Sea Shepherd CEO Alex Cornelissen says they “will now be able to have a custom-designed ship built, capable of achieving speeds that far exceed any of the vessels in our current fleet. After researching possible ship builders for the last two years, negotiations with Dutch ship builder Damen has resulted in a blueprint of our ideal ship.”“We are now able to proceed with the purchase of our dream ship and lift our conservation efforts to protect the Southern Ocean from illegal exploitation to the next level. We are extremely grateful to the Dutch Postcode Lottery and the people of the Netherlands for this very generous support,” said Cornelissen.Sea Shepherd received the 8.3 million euros from the postcode lotteries in the Netherlands, Sweden and the United Kingdom, for their “Dream Project” titled “Stop Illegal Fishing in the Southern Ocean”, which Sea Shepherd said would be used the donation to build a new ship, enabling the organization to be more effective than ever in the fight against poaching on the high seas. The Dutch Postcode Lottery contributed 7.5 million Euros, plus an additional check for 900,000 Euros from the Postcode Lottery, bringing the total donation that Sea Shepherd has received from the Lottery since 2007 to 15.5 million Euros.Sea Shepherd’s ideal ship appears to be a modified Fast Crew Supplier.With Sea Shepherd’s history of un-seamanlike operations in the Southern Ocean which, among other things, have involved dramatic collisions with whaling vessels, it will be it will be interesting to observe how their operations are modified with such a sexy new ship.In other news, Sea Shepherd announced last week Pamela Anderson has joined their board of advisors.
Article from:http://gcaptain.com/sea-shepherd-heads-damen-winning-jackpot/