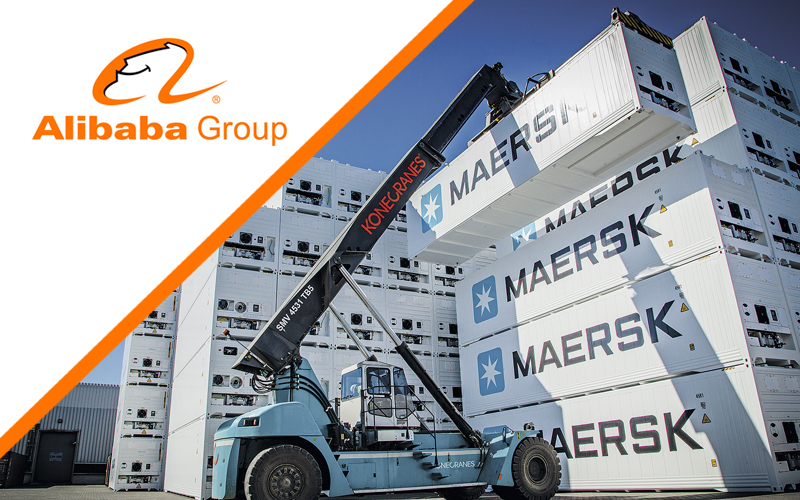 Global container shipping line Maersk and China-based e-commerce services provider Alibaba have partnered up on an endeavor which will enable ocean shippers to book space on Maersk vessels through Alibaba’s booking service, called OneTouch, according to a Reuters report.This service went into effect last month, the report said, adding that it is different from the more traditional way of shippers going through freight forwarders to reserve space on container vessels.And Maersk said in the report that this move is part of its strategy to provide digitized services for customers, with plans to roll out more pilot programs on third-party portals in the future.  What’s more, it also explained that this service was not launched with the intention to bypass freight forwarders, as the Alibaba OneTouch platform also uses companies to provide other services such as haulage.The OneTouch platform was acquired in Alibaba in 2010. It provides small and mid-sized Chinese exporters with online services, including customs clearance and logistics, as well as booking airfreight and parcel services, Reuters said.A Maersk official explained in the report that this move “allows existing registered Alibaba OneTouch users to lock in the price of required cargo spaces on selected routes by pre-paying a deposit amount,” also noting that the service will be initially rolled out on selected routes and ports, including routes from eight Chinese ports, including Shanghai and Ningbo, to Europe- and Asia-based ports.Chris Rogers, director of research for Panjiva, an online search engine with detailed information on global suppliers and manufacturers, commented in a research note that the market opportunity for this collaboration is significant. Panjiva data shows that China-to-U.S. less-than-container load shipments totaled 699,000 for 2016 through December 29.“That meant they were 17.6% of all shipments by number (not by volume),” he wrote. Growth in LCL shipments has also outstripped that of the industry more broadly until recently.”Dr. Zvi Schreiber, CEO and founder of Freightos, a logistics technology company that’s automating online freight  sales, commented that this collaboration shows the ongoing emergence of global logistics taking center stage in an unprecedented manner.“This gritty industry has taken the background role in the past but now has the potential to affect the way every product is sourced, bought and delivered,” he observed. “Building on a massive 80% ecommerce market share in China, Alibaba’s new partnership with Maersk - which controls 25% of all container ships globally - means Chinese manufacturers and retailers have a direct line to US buyers, avoiding middleman markups. Maersk is testing the waters of digital sales with one of the world’s largest ecommerce companies while threatening forwarder business. But for Alibaba, this is a direct challenge to global retailers like Amazon. Beyond drones and futuristic supermarkets, Amazon opted to get licensed as a forwarder (NVOCC). Alibaba one-upped them by going directly to the world’s largest ocean liner. Point, Alibaba.”