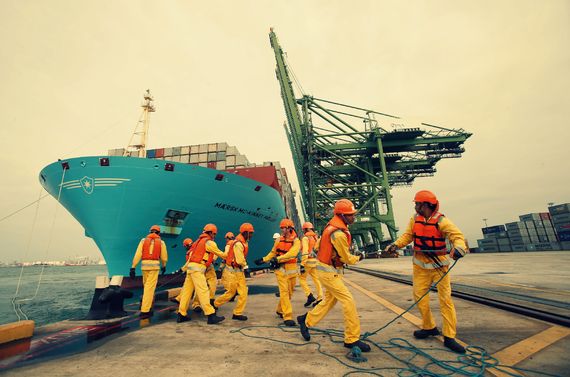 How 14,000 Workers Managed to Slow Down the Entire Economy


“Sometimes on trains I play a numbers game,” writes Rose George in her perceptive 2013 book about cargo ships. “A woman listening to headphones: 8. A man reading a book: 15. The child in the stroller: at least 4 including the stroller.”George’s game was to take quick stock of a stranger's visible possessions, and then estimate how many of those possessions had made their way from factory to consumer via container ships. In her game, it's a good strategy to guess high: The title of her book, which refers to the proportion of consumer goods that are transported on ships, is Ninety Percent of Everything.Shipping has been in the news recently because of a protracted labor disputeaffecting nearly 30 ports on the West Coast. An uneasy, nine-month-long negotiation—between the organizations representing 14,000 workers who unload containers from ships and the large companies who own those ships—has tentatively ended, and last Saturday, full port operations resumed. For the next few months, the industry will power through a backlog of ships in need of unloading, and then shipping—whose importance to the American economy too often goes unremarked—will become invisible again.“The shipping industry laments that it is only noticed when disaster happens. Usually that’s a Costa Concordia or an oil spill,” Rose George says. “The dispute…highlights all sorts of aspects of shipping which usually remain out of sight on the seas, [perhaps] because we don’t like to think about where our stuff comes from, or about the people who bring it.” As shipping recedes from the national conversation, so too will the hopes of any meaningful conversation about its working conditions and its effects on the environment.The reason that 14,000 longshoremen were able to take on the shipping industry is that they are an indispensable part of the supply chain; they are the gatekeepers of 29 ports that together unload about $1 trillion worth of goods every year. The slowdowns their union arranged were estimated to cost the economy $2 billion per day. If the longshoremen's union is unhappy and decides to impede the flow of trade, shipping companies such as Maersk have no cost-effective way to unload all of their containers.As a result, longshoremen are, in the words of former New York Times labor reporter Steven Greenhouse, “among the royalty of labor.” They are often paid between $35 and $50 an hour, and receive paid vacation days that go beyond traditional holidays. (One celebrates the birth of their union’s founder, Harry Bridges, and another is in memory of "Bloody Thursday," when two San Francisco longshoremen died during a strike in 1934.)The dynamics of the longshoremen's labor negotiations are just one of several peculiar features of the shipping industry that will likely soon slip back into obscurity. Take, for example, the lives of the crews who work on the ships, who, as their vessels waited to dock during the slowdowns, bided their time onboard even though they were within sight of the shore. The normal transit time from Shanghai to Los Angeles is about 13 to 15 days, and these crews, consisting mostly of foreign workers, had to wait while their ships sat anchored and unused. “In some instances, it’s been a couple of weeks,” said Phillip Sanfield, a spokesperson for the Port of Los Angeles. These are not the quick turnarounds that seafarers have grown accustomed to. “Life on a modern container ship is already rushed and exhausting, when they are only in port for 24 hours,” George says. However, some of them likely had access to the Internet and a cellular network while they waited—two perks that a third of workers don’t have while at sea. Another striking aspect of the shipping industry is its disproportionate impact on the environment, which arises from the type of oil that its ships run on. “It is the lowest quality of fuel from refineries, and it releases harmful emissions and particulates that damage human health and the environment,” says George. “In a list of emitting countries, shipping will still come in about sixth.”This damage doesn’t factor into the industry calculus in any significant way—which is problematic given how cheap it is to move things around the world on ships. Because the industry’s incentive structure doesn’t take into account the harms of emissions, it is more cost effective, as George points out in her book, to send Scottish cod on a 20,000-mile round trip to be filleted in China than it is to have the slicing job done in Scotland.And those issues just involve the shipping industry on its own. The slowdowns of the past four months have also hurt America’s trucking industry (which has had fewer goods to pick up from ports and distribute), retail sector (which has been waiting on merchandise deliveries), and farmers (whose exports haven’t been making it in time to other countries, likely costing them customers in the long run). And the congestion that has plagued American ports will only worsen as the economy continues to recover. It’s doubtful that any of these issues will become perceptible in the media again until the next contract dispute rolls around. Bruce Root, the captain of a fishing boat in Southern California, has seen it all before. “Contract comes up, they fight it out for awhile, and everything gets going," he told NPR. “It happens about every seven to 10 years."http://www.theatlantic.com/business/archive/2015/02/how-only-14000-workers-briefly-slowed-down-the-entire-economy/385858/