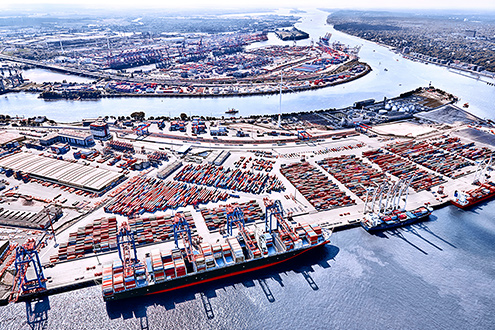 CMA CGM is one of the few major container carriers that not switched any services to the German deep water port JadeWeserPort in Wilhelmshaven. The line failed to acquire Hamburg Süd and its more recent attempt to take over Hapag-Lloyd, which would have given it a 25.1% stake in HHLA’s CTA terminal, also foundered.CMA CM has now expressed their interest in becoming a shareholder in a "possibly dedicated" container terminal in Hamburg.Hamburg’s Mayor Dr Peter Tschentscher paid an official visit to one of Hamburg’s partner cities, Marseilles, to celebrate the French national holiday on 14th July and a CMA CGM anniversary. In a meeting with Rodolphe Saadé, President and CEO of CMA CGM, the question of participation in a Hamburg container terminal was discussed.

The terminals in question would be either HHLA’s Tollerort Container Terminal (CTT) or Burchardkai Container Terminal (CTB), as both are fit to accommodate CMA CGM’s biggest (20, 000 TEU) container vessels, whereas access to CTA is restricted by the Kohlbrand bridge.
HHLA already has similar arrangements with Hapag-Lloyd at CTA (25.1%) and with Grimaldi at the Unikai terminal (49%).Local observers believe that an arrangement with the world’s third largest container carrier would be in the interest of the port of Hamburg as it could draw additional volumes to the port.Earlier this year CMA CGM acquired a 25% stake in CEVA Logistics, a key player in the 3PL market over the Port of Hamburg.