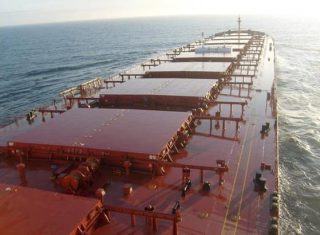 The Baltic Dry Index (BDI) fell to 994 points on Monday, May 15, down by 20 points, tumbling again below the 1,000 threshold.The index broke the 1,000 mark in March this year driven by an increase in rates across the sector and managed to stay above the line for over two months. However, the market recovery turned out to be short-lived pushing down rates yet again.The Cape index dropped by 64 points standing at 1,661 points, followed by 14-point dip of the Panamax index reaching 978 points and a 2-point dip of the Supramax index that came at 782 points on Monday.Spot average rates for Capesizes were down by USD 559 totaling USD 12,385,  while Panamaxes and Supramaxes could be hired for USD 7,870 and USD 7,370 down by USD 110 and USD 21 respectively.The drop in BDI follows a week of holidays that disrupted trading in Capesize sector, according to the Baltic Exchange.“After much expectation there was finally fixing from Brazil with more cargo in the market and Vale eventually booking tonnage. Rates were said to be hovering around, if not in excess, of the mid-USD 14.00s with Oldendorff allegedly fixing a 179,701-dwt 2010-built vessel from Singapore with several load options including Brazil at USD 15,250 daily plus a USD 200,000 bonus with redelivery Singapore-Japan,” the Baltic Exchange said in a last week’s briefing.As disclosed, South American trading lent some support to an otherwise still largely stalled Panamax market with rates for most of last week struggling to hold at last done. In addition, the north Atlantic remained under pressure although some sources suggested a floor may have been reached, the exchange said.As explained, Supramaxes had a slightly more active week but sentiment generally remained negative in both Atlantic and Pacific, while Handysizes demonstrated little confidence in the Atlantic sector, with the exception of the US Gulf.“Brokers currently suggest that the US Gulf has now hit the bottom and future fixtures will show an improvement on last done. With the various Asian holidays, the market there has been relatively flat with indices mainly having a small downwards trend,” the briefing further adds.