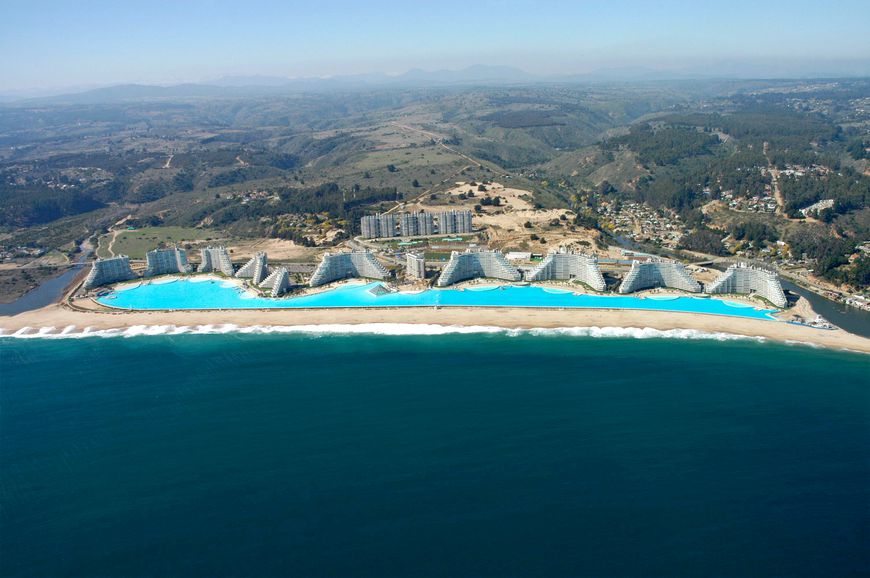 6 of the World's Biggest Pools

Think nothing can beat swimming in the sea? Some of the world’s biggest pools are giving beach escapes a run for their money—they offer white sand, cerulean waters and plenty of space for splashing around, with out some of nature's peskier accouterments (there's no seaweed in sight). The massive pools—some technically dubbed man-made lagoons—are true marvels that rival the beautiful beaches served up by Mother Nature herself. Get ready to take a dip into the six biggest pools on the planet.

Topping the list is Egypt’s crown jewel pool, the 1.3 million square foot crystal lagoon built as part of the luxury Sharm-el-Sheikh tourist development in the middle of the Egyptian desert. According to Guinness World Records, the salt-water swimming pool is the largest crystalline lagoon currently on record—its natural looking white sandy shores cover an area 27 times larger than a football field. Surprisingly, the pool has been praised for its environmentally friendly design—the pool's operating system helps with water desalinization efforts in the area.

The crystal-clear lagoon at the private San Alfonso del Mar resort in Chile held the first Guinness record as the world’s largest man-made pool (it’s the size of about 6,000 backyard pools) before being dethroned by its Egyptian cousin. Nestled near Santiago, the lagoon mimics the idyllic beaches of the region with cerulean salt-water that’s constantly kept a few degrees warmer than the surrounding sea. Think of this pool as a mini Caribbean escape on the coast of central Chile.

Also home to a super exclusive country club and chain of luxury villas, the lagoon at MahaSamutr in Thailand is large enough to sail on. First of all, it’s big—the lagoon stretches eight football fields in length—but what really makes this water spot stand out is its range. While part of the lagoon mimics some of the area's sandy beaches, other areas have a more traditional cabana-ready pool-like vibe. Just shy of eight feet at its deepest point, MahaSamutr offers its members their own personal sea, perfect for catamarans, kayaks and paddleboards.

Directly adjacent to the Chilean Sea, the lagoon at Las Brisas always offers the perfect Instagram-ready hues of blue that Mother Nature sometimes misses just a few feet away. At two hectares, the sandy saltwater pool feels bite-sized next to some of the larger lagoons on the list. Still, its transparent aquamarine waters cover the same surface area as 16 Olympic swimming pools.

Just inland from the lagoon at San Alfonso del Mar is the Laguna Bahia—a standard resort pool on steroids where you can windsurf and practice standup paddleboarding without ever leaving the all-inclusive complex. At just over 150,000 square feet, the pool winds its way throughout the central complex providing plenty of poolside lounge space.

As the world's largest rooftop infinity pool, the Marina Sands Skypark offers some killer views of Singapore’s glittering skyline and the surrounding sea. Its scale is just as impressive as the view, stretching the length of three Olympic swimming pools (it would take Michael Phelps a minute and 10 seconds to swim from end to end). At 57 stories high, you can laze in a semi-submersed lounge bed for some sunbathing that would make Icarus proud.