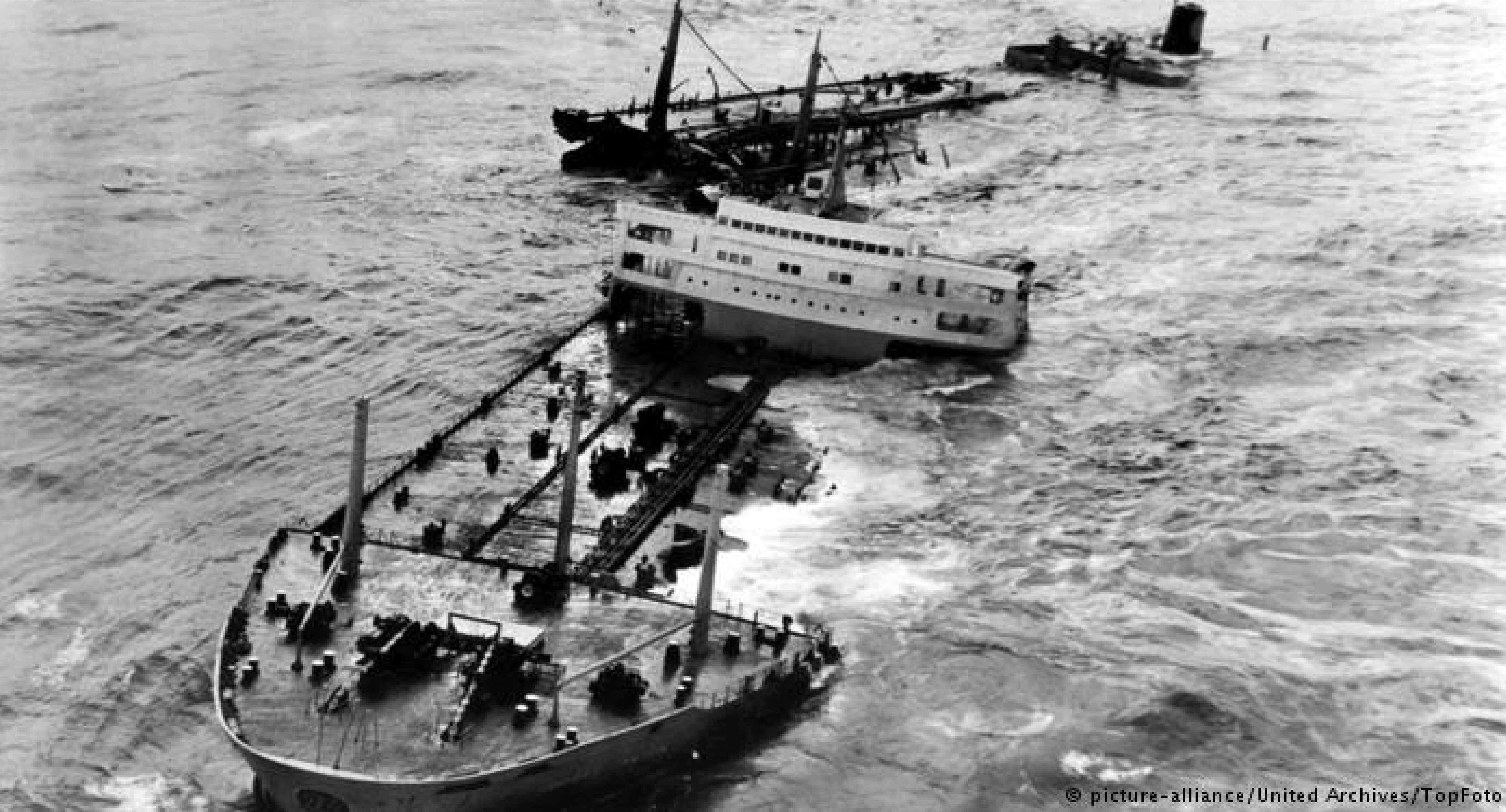 50 years on: the oily legacy of the "Torrey Canyon"

50 years ago, the oil tanker "Torrey Canyon" ran aground off the UK coast, between the Isles of Scilly and Cornwall. What followed was the world's first major marine oil spill.In the morning hours of March 18th, 1967, the crew of the "Torrey Canyon" - a large, and at the time newest-generation, state-of-the-art crude oil tanker – made a number of navigation and steering errors. The ship was carrying almost 120,000 tonnes of crude oil. The mistakes made by the crew and their captain were to have unprecedented consequences. The Torrey Canyon hit the world headlines and went down in history as the first major marine oil pollution disaster.The  "Torrey Canyon" struck Pollard's Rock in the Seven Stones Reef off the Cornish coast. That was the beginning of a huge environmental catastrophe. Part of the hull was ripped open, causing a large amount of its black cargo to leak into the sea. Eventually, the whole wreck just fell apart and every last drop of the 120,000 tonnes of crude oil drained into the sea.When the unprecedented oil slick reached its furthest extent, covering an area of some 1,800 square kilometers (about 700 square miles), the British government decided on a radical combined action plan: burn the oil and clean up the mess."Explosive surgery" is what the Ministerial Committee on Emergencies called the procedure at the time. The oil slick was to to be set on fire by bombing the tanker, ultimately using even napalm.Afterwards, the British government used a mixture of barely researched toxic dispersants. The 10,000 tonnes of these chemicals which were used, ended up being even more damaging to the environment than the oil itself.The outcome of the disaster was the pollution of over 290 kilometers (180 miles) of English and French coastlines with toxic crude oil. For some species of marine animals and plants it took decades to recover. More than  25,000 birds died from oiling.The legacy of the Torrey Canyon

The notorious "Torrey Canyon" quarry on GuernseyOne of the places that were worst affected was the island of Guernsey. "About 19 days after the "Torrey Canyon" ran aground in Cornwall, a large slick of oil hit the coast of Guernsey and covered the beaches, bays and rocky inlets," Rob Roussel, senior project manager of waste services on Guernsey told DW."Because Guernsey was a significant tourist destination at the time, they had to act very quickly in collecting and removing the oil from the beaches. And the decision was taken to put it in a small quarry in the north of the Island," Roussel said. What nobody had considered when this location was chosen, was that it created an area extremely hazardous to birds and other animals for the next half a century at least. As Steve Byrne, manager of the Guernsey Society for the Prevention of Cruelty to Animals (GSPCA) told DW, "birds used to identify the quarry as a water source and would often fly in, which led to potential slow death."Over the years, oiling therefore killed "thousands, if not tens-of-thousands of birds," says Byrne. And he remembers, "you could see them floating in the thick crude oil on the surface."

Thousands of birds found their death in the black waters of the "Torrey Canyon" quarryCleaning and rehabilitation efforts were also made difficult, because of an unknown number of potentially live explosives and ammunition from World War II in the quarry area. That is also why any further potential recovery and remediation of the sediment at  the base of the quarry is extremely complicated, Roussel said.What bothers Roussel in particular is that "the original polluters BP, have not contributed in any way, whatsoever. All the clean-up works that have been undertaken over the years, have been carried out by the States of Guernsey."No hope for Guernsey?For years, the quarry remained toxic. Then in 2008, "we introduced bio-remediation, using selected microorganisms to feed on the oil that was on the surface," says Roussel. The effects have been tremendous.Today, the surface of the water is mostly clear of oil, and birds no longer run the risk of dying from contact with the water. The last two birds that were rescued out of the former death trap were great-crested grebe Adele and kestrel Olivia, in 2012, says Byrne.There are several incidents per year, where seabirds suffer from oiling along the shorelines of Guernsey. During stormy weather, oil is often churned up to the surface and puts seabirds and marine animals, like the locally residing grey seals, at risk. Some of it is likely to be left over from the "Torrey Canyon".

Grey seals are among the sea animals affected by the occasional oil spill remainsThere will be after-effects for decades to come. "Obviously the water quality in the quarry is still affecting the wildlife, because it cannot establish itself there," says Byrne. "But there has been a dramatic reduction in the animals that were being affected."These days, a company based in the UK, called "Oil Spill Response Limited", uses the quarry on Guernsey for training exercises. The "Torrey Canyon” was only the beginning of a whole line of oil accidents. As shipping and the offshore oil industry have increased, accidents have become more common, and developing techniques to minimize environmental disaster has become a business in its own right.