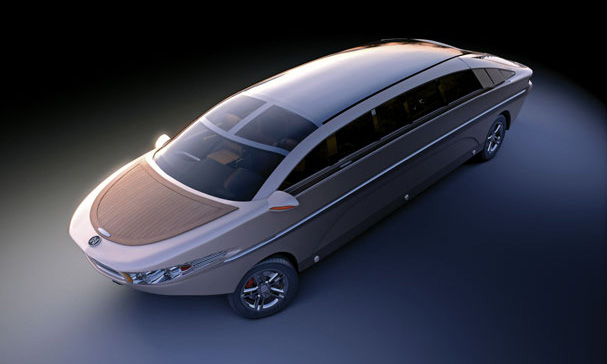 1. Yacht with a volcano

It’s a kind of bring-your-own-tropical-island pitch that motivated the UK-based Yacht Island Designs to come up with this prototype. A “volcano” is fitted on the roof, where water streams out into a pool surrounded by lush palms. But if you want a real tropical splash, the yacht opens out to the sea with a deployable beach deck at its rear

It’s not the first, but definitely the largest and most luxurious solar-powered yacht to sail at 8.5 tons. Turanor can run for three days on its lithium ion batteries, so a night sail is not out of the picture. The prototype cost Polar Solar—the company behind it—around $20 million to develop, not quite expensive if you ask our billionaire friends.

3. There’s an iPad app for that

Adastra is a 139-foot luxury yacht that can be controlled through an iPad. Designed by England-based John Shuttleworth Yacht Designs, Adastra looks eerily similar to the alien ships in the movie Battleship. Expect to shell out over $15 million if you like your iPad to go with this yacht.

While luxury yachts are designed to give you the comfort and feel of home or a luxury hotel, this yacht literally makes the ship to look like your expensive home. The German ORSOS conceived the yacht with 10,000 square feet of lavish living space complete with a home theater, or should we say, a yacht theater?

You can’t take any risks in the open sea if you’re a multi-billionaire, especially if you’re Roman Abramovich, the Russian who owns the world’s second most expensive luxury yacht, the Eclipse at $800 million. We’re not impressed with the price (it’s been eclipsed, anyway), but with its military-grade missile defense system and own submarine to keep the modern-day Tsars safe.

It’s got a pool on its deck and it’s a sub. The Migaloo Private Submersible Yacht by Motion Code looks like the kind of transportation a James Bond villain needs. It’s in concept stage, but very feasible according to the company considering the lure of ultimate privacy afforded to the multibillionaire by submerging 787 feet down in the middle of the sea, away from even the staunchest paparazzi.

Some billionaires want to splash their lifestyle above water. In that case, they can have their own Monte Carlo.  The Streets of Monaco yacht concept by Yacht Islands boasts of a grand prix circuit replica of the casino city, along with landmarks and interior of Monacan luxury hotels.

It turns out multibillionaires are out for freebies, too. Swedish boat builder Strand Craft thought about throwing a freebie for customers who bought its 122-feet Rolls Royce-powered super yacht. Order now and you get a FREE! custom-made supercar powered by 880hp twin turbo V12 engine with a top speed of 233 mph. But wait, we don’t really mean you place a call because all six limited yachts had been sold out. Sorry.

It reminds us of biology class. German ship builder Blohm + Voss came up with a concept of a 420-feet yacht that appears to be covered with muscle sinews. The yacht uses a liberal dash of graceful lanes and lines, overlapping and crisscrossing them to create fluidity. It’s clearly built with maximum hydrodynamics in mind.

It’s a limo that turns into a yacht. Or is it a yacht that turns into a limo? Either, the Limousine Tender 33 by Nouvoyage is arguable the first of its kind, a luxury yacht that can travel on land (or a limo that can swim). The company said it used state-of-the-art technologies culled from commercial, military, and racing industries to make the amphibious limo a feasible mode of transportation, in style, of course.You’d think the billionaires who own these yachts are silly. But not really. They’re just trying to be unique. Much like you and me in a much smaller way, putting us all, ironically, in the same boat.